The ship nobody thought they'd make... a real transatlantic ocean liner, now the only one left, the replacement for the 1969 QE2.
Introduction
The Queen Mary 2 is unique.  She is the only transatlantic ocean liner left in service.  She is huge, fast, strong and has numerous unique aspects to her design that define her as an ocean liner rather than just a cruise ship.  She is the longest, widest, fastest, most powerful and most expensive passenger ship afloat.  She is a worthy successor to the 3 legendary earlier Queens. 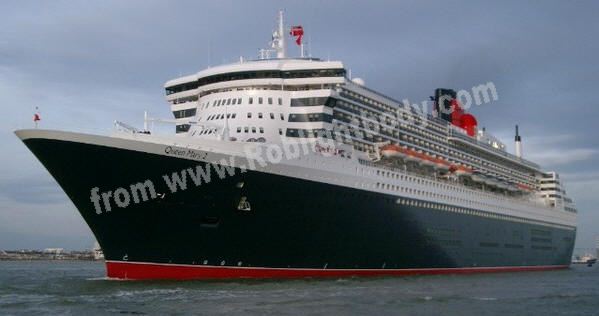 After arriving in her home port of Southampton on Boxing Day 2003, Queen Mary 2 was named by the Queen on the 8th of January before setting out on her maiden voyage to Florida on the 12th.  She and her sister ship the Queen Elizabeth 2, were the only 2 true ocean Liners left in the world.
In 2004 the two "Queens" came together in a sight not seen since the 1960s:
two high-speed ocean liners, whistles blaring, together in the mid-Atlantic"
QM2's first eastbound Atlantic crossing was on April 25, 2004, when she sailed from New York. And it was a day to witness: With running mate QE2 in the lead to show her theway, the pair departed the Manhattan piers in the afternoon of what was the QE2's last scheduled Atlantic crossing to England. Somewhere mid-Atlantic, the two Cunarders closed the distance between them and the flagship role so long held by the QE2 was symbolically passed to the QM2, which then led her older sister into Southampton. 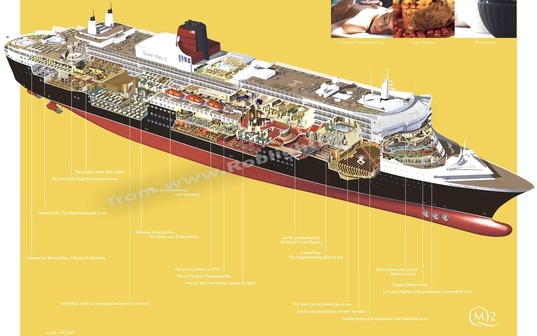 Rob's QM2 Fast Facts:-
Some early artists impressions of Project Queen Mary
To give you some idea of the immense size, Cunard arranged for a London double decker bus to drive underneath the still incomplete QM2
"I'm Ready to go home now"
Queen Mary 2 leaves St. Nazaire, December 2003
News Articles from before she was floated out.

News articles from after she was afloat, and entered service