Roblightbody dot com
Home > Ocean Liners > Queen Elizabeth 2 (QE2)
Queen Elizabeth 2 (or QE2 as she was almost always referred as) was launched in 1967 by the Queen at the famous John Brown's Shipyard in Clydebank, near Glasgow, Scotland and began her long, long service life in May 1969, travelling nearly 6 million miles (further than any other ship ever) before retiring to Dubai in November 2008.

She was conceived to be a transatlantic ocean liner first and foremost (fast, strong, comfortable & safe in heavy seas), but they also designed her to capable of cruising successfully - with full air-conditioning, vast open decks, 4 swimming pools etc.

She was the Flagship of the British merchant fleet and the only ship providing a regular scheduled 5-day transatlantic passenger service for over 30 years until the launch of the QM2 in 2004.  She was the first ship in the world to be awarded 5 stars by the Royal Automobile Club, an honour normally reserved only for top-class hotels.

For all of her 39.5 year service life, she exuded taste, class and luxury more than any other liner. She was understated and 'comfortable' in a truly British way.  She was 'lovely' and many thousands of passengers travelled on her time after time.  Her restaurants were equivalent to the very best hotels in the world. Glorious food was served throughout the day and night whilst on board.  Her 1,800 passengers had over 1,000 staff at their beck and call.
In 2008 The marvellous 'space age' Queens Room, although significantly re-decorated
and re-furnished, still felt like the room did in 1968, and all the better for it.
Feeling completely different by day and by night.
When she was new she had fantastic modern space-age 1960s interior decor and a revolutionary sleek modern white funnel.  Over the years she became increasingly more "retro" and in the late 1990s this came to a pinnacle with the "Titanic" style that the public think they wanted.  Elements of the original design remained until 2008, however, if you knew where to look and the overall effect was rather good.
In 2008, even this tapestry (above right) was original, as was the original extruded
aluminium handrails and the bannisters, although they'd been re-painted.
Speed - Right up until her last day in service in November 2008, QE2 was the fastest merchant ship in operation capable of speeds of up to 34 knots ; her service speed of 28.5 knots, was far beyond most cruise ships maximum speed and her average speed, including time spent stationary in port was over 24 knots.
She could effortlessly exceed 30 knots, even on her final voyage to Dubai.
She could make the Atlantic crossing in less than 4 days.  (By comparison, the 2007 Queen Victoria's maximum speed is in the very low 20s and she needs 8 or even 9 days to do the crossing).  She could sail backwards (19 knots) faster than many cruise ships can sail forwards.

Power - NINE diesel engines, each larger than a London double-decker bus, connected 130,000 hp to the largest marine electric motors ever built and gave her the most powerful propulsion plant on a non-military vessel.   She was the most powerful and fastest twin propeller ship in the world.

QE2 on the Clyde on the 20th of September, 2007, 40 years to the day since her launch there. QE2 was Home for her birthday, and there was a HUGE turnout especially since everybody now knew she only had 1 year left at sea... these photos and video is of her heading into the night, to continue her round-Britain celebration birthday voyage.

Well Travelled - She completed 26 circumnavigations of the world and travelled 5,875,264 nautical miles!!  That's further than any other ship ever has, or ever will do again.  Its equivalent to 270 times around the equator or 14 return trips to the moon. 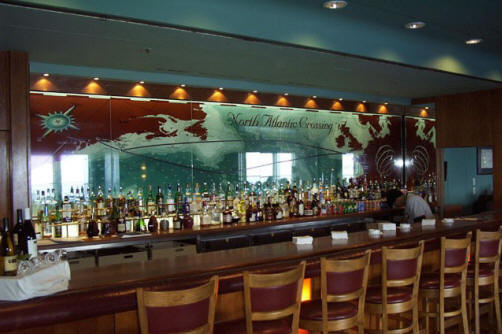 The Chart Room bar - was one of my favourite spots on board
Some Highlights from my many QE2 pages on this site :-
For hundreds more pages, see the menu at the top, and all the levels beneath it,.
QE2 Internet Links
Please let me know of any quality QE2 sites, about her life prior to December 2008 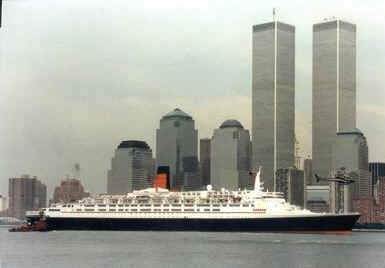 2 Icons of man's achievements in the 20th century. 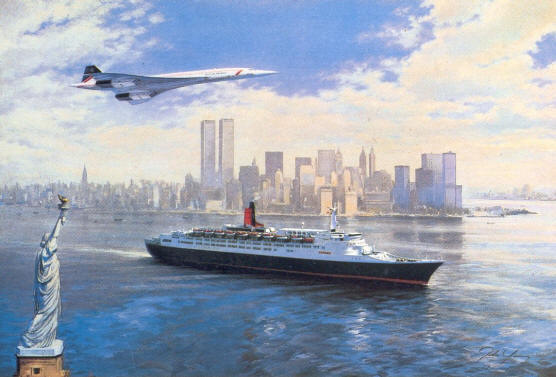 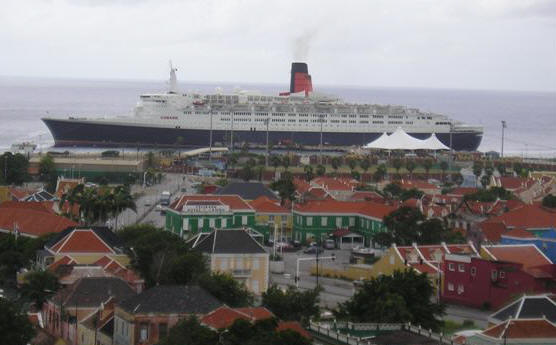 Above photo, of the QE2 in Curacao copyright © 2005 Desmond Rafferty.