End of the Mini

Source Link - http://news.bbc.co.uk/1/hi/business/955500.stm
After 41 years of continuous production and more than five million cars built, the classic Mini has come to the end of the road.Production of the compact car finished on Wednesday at the MG Rover Group factory in Longbridge, Birmingham.
There have been nearly 140 different models of the car since it was first introduced in 1959, as an economy vehicle in the wake of the Suez oil crisis.

BMW will produce a new version of the Mini at the Cowley works in Oxford.

Many of those involved in the production of the Mini across six decades attended the end of production ceremony at Longbridge on Wednesday.

The move to end classic Mini production at Longbridge and switch it to Cowley was decided after BMW sold Rover to the Phoenix Consortium earlier this year.

Originally designed by engineer Sir Alec Issigonis, the Mini was intended as an economic rival to German bubble cars, in the years after the 1956 Suez Crisis.

Hailed as one of Britain's greatest design achievements, the Mini was immortalised in the film The Italian Job, starring Michael Caine.

The new BMW Mini, which goes on sale from next year, enjoyed critical acclaim when it was unveiled at last week's Paris Motor Show. 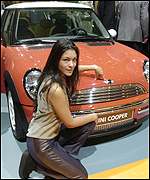 The new Mini has a lot to live up to
It will first be seen in Britain at this year's Motor Show, at the National Exhibition Centre in Birmingham later this month.

Longbridge will start production of the Rover 75, which was previously built at the Cowley plant in Oxford.

But output is to be cut by almost 75%, it has been reported.

Rover has told The Daily Telegraph that it intends to build 3,000 Rover 75s at Longbridge in the final three months of the year, just a quarter of the 1,000 cars a week produced at Cowley.